skip to main | skip to sidebar

The Muslims That Don't Make the News.... 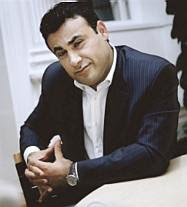 Gates of Vienna has a profile of a Muslim member of the Danish parliament, one Naser Khader.

The term "moderate Muslim" tends to earn at the least an askance glance from many because when it is used it seems to be applied to people who either aren't Muslim or aren't really moderate. PM Khader is both, and is not a windsock meekly keeping quiet out of fear of reprisals from his radicalized fellows.....

We’ve seen a lot of discussion about the “moderate Muslim” in this space, with some contributors and commenters arguing that such a creature does not really exist. But Naser Khader is most definitely a Muslim, and most definitely a moderate.

According to the Danes I talked to, the man is sincere and dedicated. He has put his life on the line by urging Danish Muslims to stand with their infidel countrymen and support freedom of religion, freedom of speech, and constitutional democracy in their adopted homeland.

.....and therein lies the rub. If they're not blowing stuff up, the press ignores them, if they are not denouncing the US the press is averse to their message, if they are quietly getting about their lives like most people...there IS NO NEWS THERE!

Thus the image of Muslims as irredeemable lunatics is perpetuated, along with the notion that any attempt to help them cast off the maniacs in their midst is doomed to failure.

I do not mean to minimize the issues that Islam currently has with human rights in many parts of the world including Europe. It is important to remember however, that one of the Presidents more important positions is that he doesn't want this to be a religious war. We should be discretely embracing and supporting these people, rather than ignoring them because they're not blowing people up.

The lack of coverage of these sorts of people perverts the dialog on both the right and left.

The Left views the lack of news of moderates as meaning "The genuine Muslims all hate America and have no interest in our imposing our views of human rights upon their pristine gaia friendly ancient and noble no-nwestern culture....the radicals are speaking and acting in frustration as they fight the good fight against American imperialism and there is no support for those few false consciousness cases who oppose the will of the majority...(who are represented by the Muslims who do get press)"

The Right looks at the coverage and concludes" Wow! They're all a bunch of feral murderous lunatics!"

This long war requires competent information warfare as much or more than bullets. it requires knowing who or potential allies are and what obsticals they face. It is an intricate, and prescice art for which a broad brush is singularly unsuited.

On a related note, it should be mentioned that PM Khader is featured in the recently finished, but unlikely to be aired PBS documentary ISLAM VERSUS the ISLAMISTS which, if it ever gets aired, points out the dangers that genuine moderates face in standing up to the violent Muslims. More on this here, here and here.

Anyway, go over to Gates of Vienna and read the whole thing.
Posted by Brickmuppet at 5:02 PM

Brickmuppet
I'm a 37 year old UPS employee, college student, Coast Guard reservist,amateur diver and general geek. I hope to study in Japan in a few years and I'd like to move to the overseas territories, especially Guam. I do lean a bit to the right politically.....but you knew that if you looked at my blog. I want to live long enough to walk on the Moon or Mars before I go. It is important to note that the views on this blog are my own and not those of UPS or the United States Coast Guard Reserve.